Building A Legacy In Waikite Valley

I’ve been fortunate to visit many of Te Pari’s customers throughout New Zealand, and I was on my way to the Waikite Valley 35kms south of Rotorua. I know the area as I’ve hunted with the Rotorua Bay of Plenty hounds over the lovely rolling free-draining pumice country – it’s good for horses’ hooves and likewise for cattle. Corban - a third-generation Blampied at the Oamaru-based family business Te Pari Products - asked me to visit Mark and Sherrie Stokman on their Stokman Angus Stud.

I’m always excited to discuss owners’ experiences and why they love (in the Stokman’s case the SY150) cattle yards they bought from Te Pari. I was in for a very pleasant encounter - a journalist’s dream story.

Without prompting Mark told me all the reasons why he chose the steel yards and just how GOOD [his emphasis] he believes they are. “I’ve already bought three Classic cattle crushes; the first nearly two decades ago in 2000. So, when it came to building my yards for the Angus selling complex here, I knew they would be Te Pari metal ones - and before you ask - I had been told they’re noisy, but that’s a complete myth. You can slam a wooden gate and make more noise than my metal ones and the wooden one would break!!” he said with a chuckle. In response to my question ‘why these yards?’ Mark said “I guess it’s many things”, rocking back gently on his heels as he gazed across the yards - “they just work for us”. I could see from the beautifully maintained farm that Mark was proud of it and his new yards. “I love showing off our bulls, and these yards make that possible. Although only 18 months old, they are used most weeks and often several times. We’ve only washed them once as they stay clean. The grooved concrete is easy for the cattle to stand and walk on without slipping. We use these now as they are more efficient than moving cattle a long way through the farm. We still use the two wooden sets we have, but I have to check every time that there are no broken boards or nails sticking out that could injure stock or staff. Our bulls have high genetic values and the present beef schedule doesn’t come close to covering the loss if the yards cause an injury or death.” “Our farming operation covers 400 ha, 375 ha effective with the geothermal active Lake Ohakuri as a backdrop.

Our need was for safety, speed and convenience with little maintenance.

I‘m sure you’ve been told about Grandpa’s wooden yards – they replaced every post, rail and gate several times, lifted sagging gates and tightened gudgeons - but they’re still the same yards he built over 50 years ago! “ I’m not old, but I’m not going the other way either, so I wanted to build a set of yards that could be operated by one person in safety – and where the cattle could move easily and quietly around them. I just don’t like to fight it when I’m working in the yards”.

“We mainly get in mobs of 15 or so, and then split them up into several smaller groups. The yards are designed for up to 150 which is more capacity than we need at present, as our bull sales are around 100 bulls and 60 heifer lots”. Looking around I noticed the vast number of pens even for 150 cattle. “We put in about 8 - 10 per pen for viewing.” said Mark, “as we wanted to be able to separate stock prior to going into the sale ring. They don’t get agitated or jostled by bulls behind them and so are much calmer. 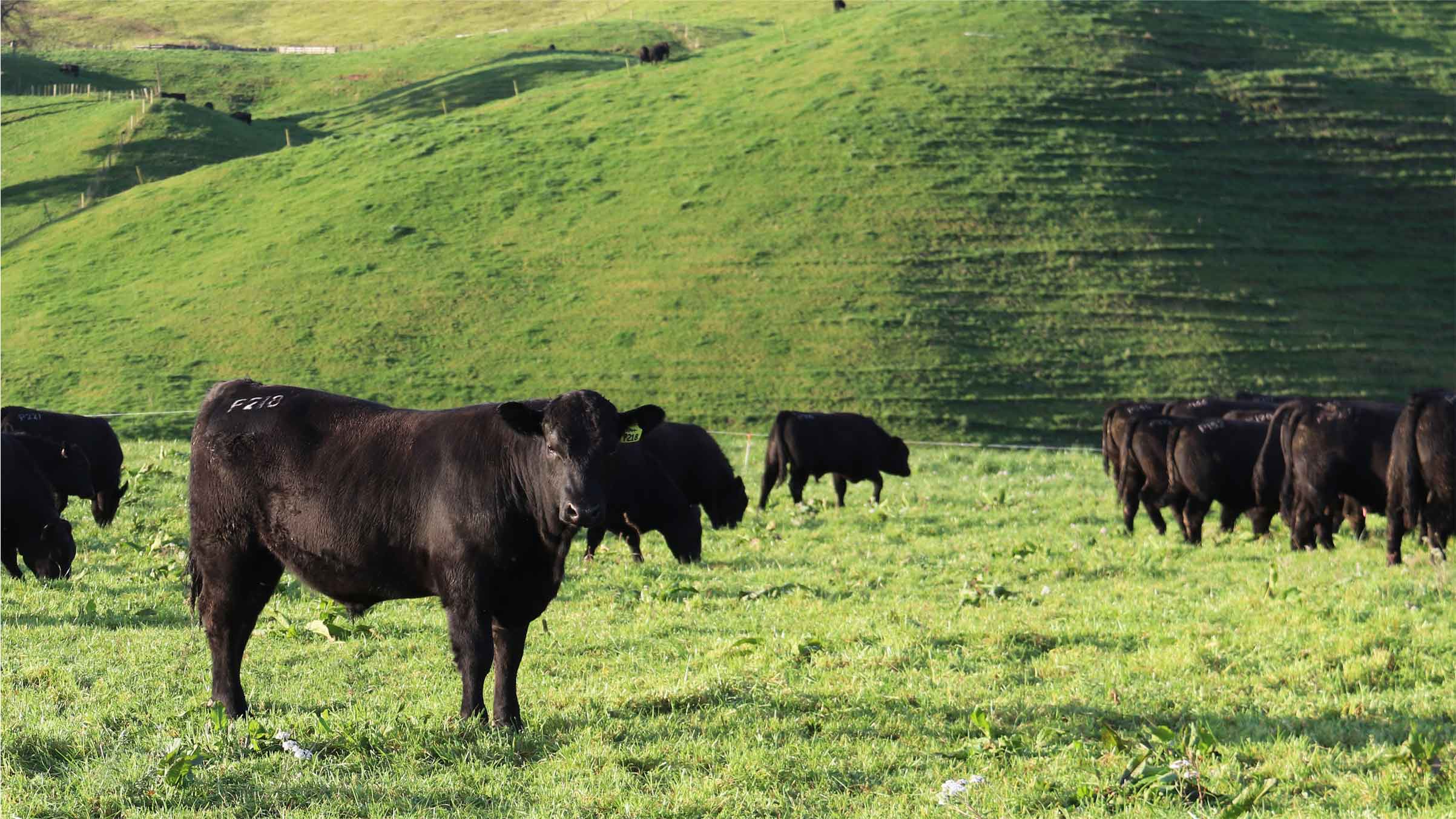 “Remember I told you Josh Garton from Te Pari had helped me by designing exactly what we needed? Well, he recommended that we add the extra yards and gates. He drew up a CAD drawing, printed it out and we walked out the plan to see how it worked and what changes we might need. It was great to physically hold the document and know we were both on the same page. Josh made me feel confident that Te Pari would deliver exactly what Sherrie and I wanted. “The circle works and so do the four individual gated pens for the viewing prior to the ring. My little bit of Dutch heritage almost made me try to save the money by not going for them, however, Josh had not only been straight with me; he knew what he was talking about and that inspired confidence. He was honest and I trusted him, so I went with his judgement and yes - he was bang on the money. I did need them and now I wouldn’t even consider trying to save money by going without them. It’s the added peace of mind.

“Sometimes you’ve got to trust the professionals, and Te Pari has proven to me over and over again that they are. I’ve seen the constant improvements they make with their Classic Crushes. Of the four I’ve bought, each one has been better than the one before. While I’m talking about crushes - have you seen one of these, a Vet Crush they call it? It’s a metre longer. Easier to get cattle onto the scales and then you can fold the gates in at the back to work in complete safety. The vets love it; it saves their time and mine” Mark told me with real conviction in his voice. “ So much better than wooden rails.” “ I love that when you close a gate it stays closed, latches slide easily, gates swing without effort and I know my family, staff and clients are safe. 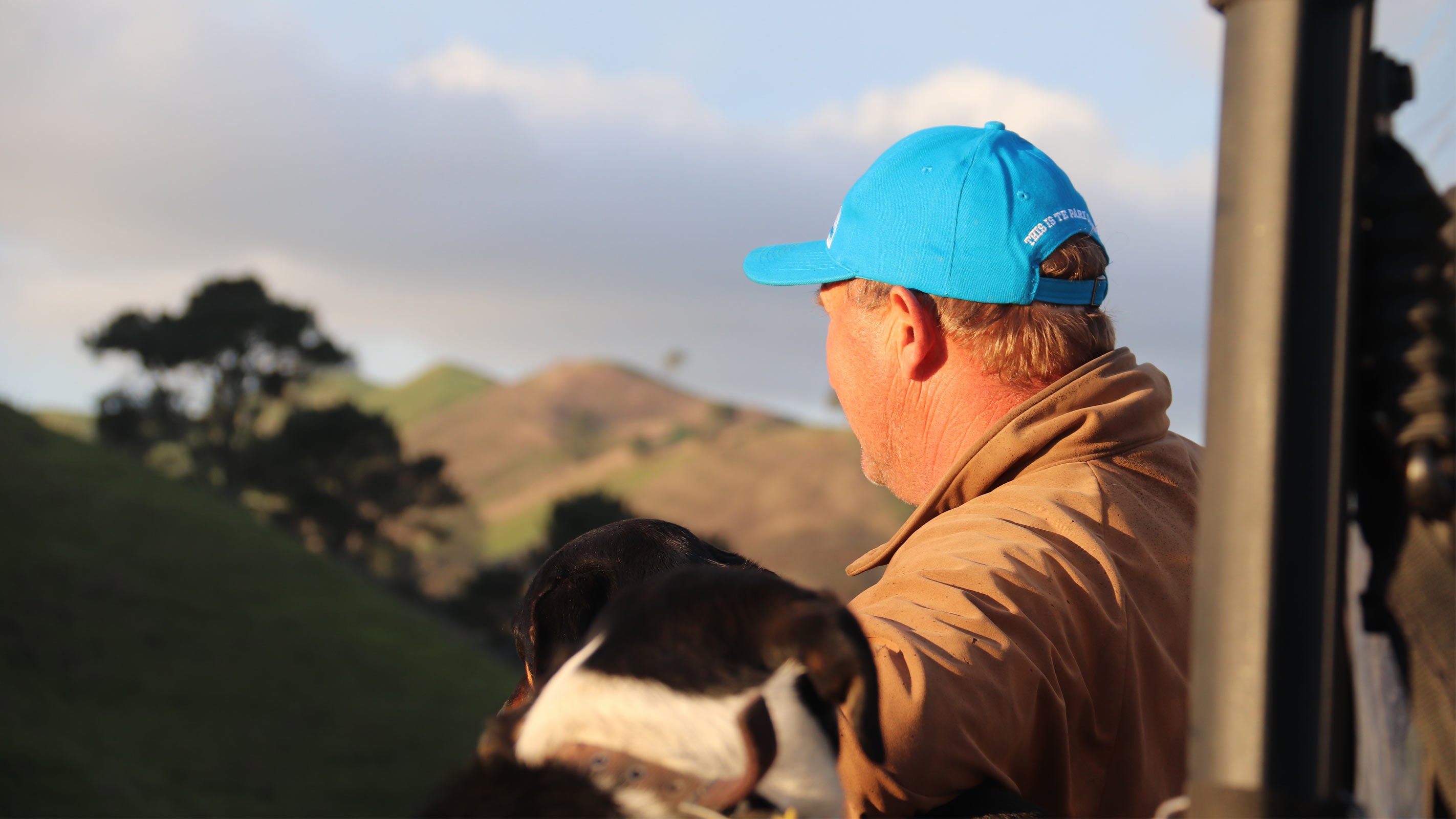 One person can easily and safely handle bulls alone in the yards saving on time and expenses, as the cattle are also safe; calmly moving around the complex”. The nosy journo in me opened the gate to the catwalk area with the semi-circular tub. The extra-wide catwalk leaves plenty of space for people to walk past each other and gives an excellent vantage point for the whole complex.

As we stand there, Mark points out how easy it is to see through the 50mm bars and gates. “So much better than wooden rails” he smiles. I relate the story I was told 15 years ago while interviewing Bill Taylor in his yards in the Selwyn District of Mid Canterbury. A wild, fully grown 6-year old 1000 kg bull charged him in the yards. Bill - a slightly built man of ‘advancing years’ [his words] - had got Te Pari to put in “man escape holes” where the sides of pens had gaps between the panels just big enough to get a human through in a hurry. Bill used one of them when the bull charged him. It missed him but bent the bars. Te Pari offered to replace them, but Bill turned them down. “Much too good a story! 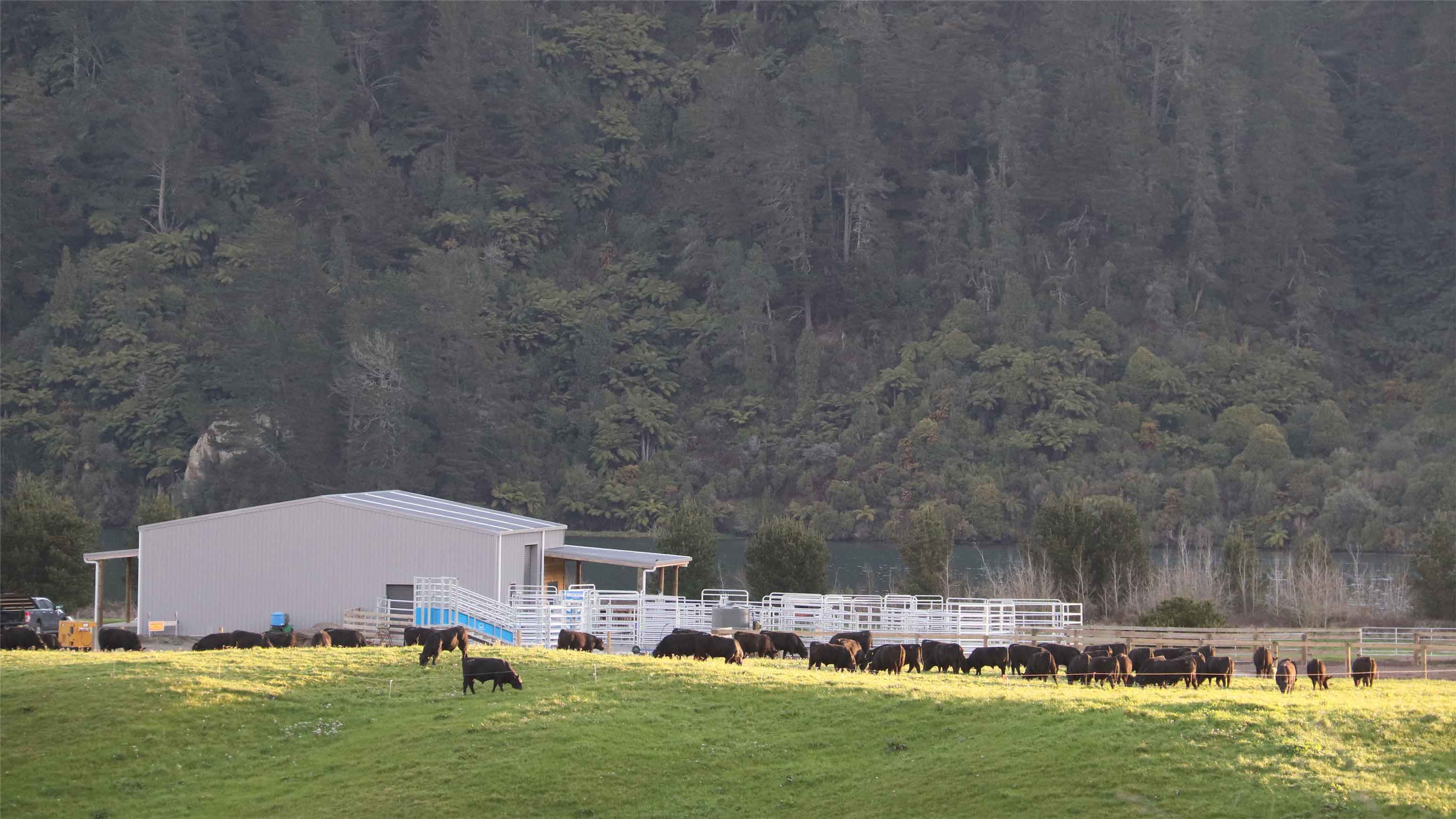 “Come over here and look at the loading ramp”. As we walk over Mark says he was going to order a solid concrete ramp. Once again Josh persuaded him to stay with all things Te Pari. “The wide,
easy-to-use loading facility has the same rails and easy-latch gates, and also has this very wide access ramp for people that truckies love. It works brilliantly” he said. My time with Mark was over, and as I wandered back to the car with him, he said “come back to our September sale and see these in action - and Sherrie will be here”. I waved and tooted gently as I drove away; I had enjoyed my all-too-short time with enthusiastic Mark. He makes a journo’s job easy.